How crisis can drive change with Shamil Idriss 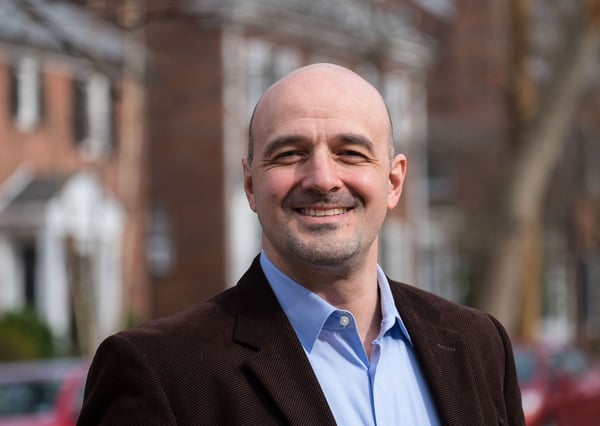 Search for Common Ground (SFCG) is a global peace-building organization, founded at the height of the cold war. Spread around four continents with a presence in more than 30 countries, the organization seeks to transform the way the world deals with conflict through fostering cooperation across dividing lines.

Equality Check met up virtually with their Chief Executive Officer Shamil Idriss, who has led efforts to end violent conflicts in more than 35 countries globally, amongst them some of the most devastating conflict zones in Africa and the Middle East. With his extensive experience in conflict transformation, Idriss takes us through how SFCG works towards developing solutions for destructive conflicts, the role of gender equality in their peacebuilding work, and how the current situation leads to an exacerbation of societal inequalities.

What role does gender equality play in your peacebuilding work?

Women's leadership and the role of gender norms have a big effect on peacebuilding. It’s been demonstrated through research time and again, processes that include women in decision-making and negotiating roles tend to produce peace agreements that last longer. Nevertheless, it is still only a small minority of peace processes that engage women in those ways.

The importance of women’s inclusion is not merely an issue of numbers – in other words, that it is a good idea to include women’s perspectives as they make up half or more of any given population.  It is also an issue of how men and women tend to relate to power. Men tend to get preoccupied with who will have power and how to carve up power in peace agreements, and not necessarily on how that power is to be used wisely. Male-dominated negotiations often fixate on who has and will have the authority to make decisions.  We saw this recently in the U.S. around the debate between the President and various State Governors debating with each other who has the ultimate authority to “re-open” the economy, but honestly, I don't think anyone could care less. The conversation should really be about how to re-open safely and what needs to be accomplished, together, to make that possible.

Our work revolves around women’s representation, participation, and level of authority. Supporting women so they can get access to resources and play a role in decision-making. When you are doing community-level mediations with female mediators, you sometimes experience initial resistance, particularly from men reticent to subject themselves to a woman-led mediation. But what you find is that if an when you overcome initial resistance, you tend to see much more use of mediation mechanisms, including by women who otherwise might feel shut out from these processes.

Our approach to influencing gender norms though is not different from our approach of trying to influence other norms. We don't engage in an adversarial advocacy, “name and shame” campaigns or frontal pressure campaigns against governments or others in power. We foster change through transformational collaboration, and also through making it safe for people to change positions while retaining their dignity, rather than shaming them into doing so.  This is why much of our work around shifting gender norms includes substantial investments in fostering and popularizing notions and models of positive masculinity that are not predicated on the subjugation of women.

SFCG is very well experienced working in areas challenged with infectious disease. How has the current situation influenced the organization’s activities?

Our teams around the world have been at the frontlines of epidemics before, particularly Ebola, but also cholera and polio. Conflict-affected communities are particularly vulnerable to infectious disease on a couple of fronts. One aspect that is deeply concerning to us, is that infectious disease tends to run rampant and also linger longest in conflict-affected areas. In these communities, you are often dealing with poverty and poor healthcare infrastructure in addition to a substantial lack of trust and weak governance. This combination may exacerbate tension both between communities and between citizens and governments agencies (police and public health workers for example).  The lack of collaboration, coordination and trust can make such societies a breeding ground not only for the infectious disease but for further violence and instability.  It is terrible though not surprising in this context that the places where polio has persisted for decades now are in conflict affected states with very low levels of community trust in government.

Another challenge is disinformation. Credibility and expertise are not always correlated. You have to find ways to channel expertise through credible platforms and avenues to get the information out, helping people understand what’s true or not, otherwise the public health response can be severely undercut.

The gender issues are highly relevant in situations like we experience now. How is the current situation affecting equality-related work?

How this situation affects gender dynamics is substantial, where the current pandemic both exposes and exacerbates inequalities. Challenges related to economic disruption are disproportionate for women. Barriers to women engaging in political processes. When you look at the people most often excluded from the public square in terms of voicing their concerns, perspectives and ideas, they are disproportionately women. Within families, women are also often the ones caring for the sick. In addition to this, many of the places we work, women and girls have fewer options to protect themselves. They are often those assumed and expected to care for the ill and, even after the recovery, women are often not always allowed back into the workforce and public settings, even if they previously were.  We saw this with the Ebola epidemics across West and Central Africa over the past five years.

We have seen the long-term impacts of this in our work during the previous crisis, where the cloistering of women after the crisis lagged beyond where it was before the crisis. The inequalities are not always gender-related, but a lot of them are, so we are trying very hard to integrate women’s voices into decision-making and amplify concerns to authorities and influencers.

With every crisis or conflict, there might be some opportunities. Can something good come out of a situation like this?

You should never waste a crisis, as it may be the best moment in which to drive change. One of the assumptions at the founding of our organization in 1982 was that the world is getting smaller, and more interdependent. This pandemic is the most universally shared experience of human history and might offer us an opportunity to actually rethink some fundamental ways in which we are living. The unsustainable nature of how we are treating the planet, how we are dealing with conflict, and how we are dealing with the issues of gender to mention a few. But only if we really take advantage of it and see it as that opportunity.

Something that strikes me right now, is that people are using the pandemic to repeat all the more loudly whatever they were saying and advocating before the pandemic. If the situation is used as a means of yelling all the more loudly across polarized divides instead of initiating new kinds of dialogue across old dividing lines, we are not going to get anywhere behind the hyper-polarization so many of us are already experiencing in our societies. To me, it’s not only about starting a conversation. We need to start it from a different kind of way, where it does not feel like one side attacking the other and where we can orient our conversations around the actions we feel we can take together to improve lives and livelihoods for all concerned.

I think we can leverage the fact that the world is interdependent to come out of this pandemic in a better place than when we came into it. That’s our commitment.

What's your number? Everything you need to know about pay gap analysis